Corma’s patented Single Channel Double Wall Die is the ideal solution for PVC with a number of advanced features. It can also be used for PE and PP pipe production.

The die allows for low melt pressures and high output rates. Disassembly and assembly takes much less time than required with other PVC die designs, reducing downtime to minutes instead of hours or even days. The die gaps that determine the inner and outer wall thickness can both be adjusted. This feature is most important in the production of PVC Double Wall Pipe, as the die can be very quickly disassembled in an emergency shutdown because of an electrical power failure, etc. The Corma Single Channel Die is also a low-friction design allowing for economical PVC dry blend to be used.

In the die tooling, the pipe’s inner layer is formed by centring the die orifice which is adjusted downstream from the corrugated wall orifice. The outer wall parison is adjustable from the die body.  Changing from Double Wall to Single Wall Pipe, or vice versa, takes only minutes because Corma’s Single Channel Die can be used to make both types.  Only the tooling part at the tip of the die must be changed. 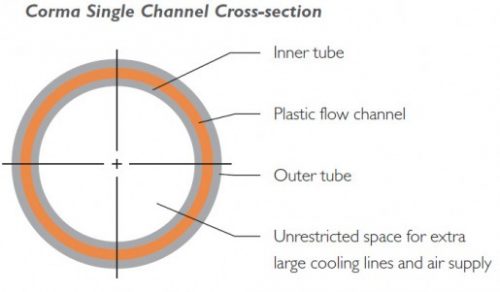